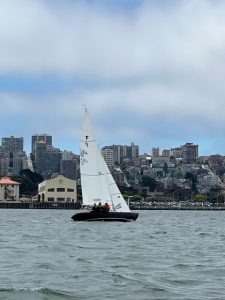 The Woodies Regatta is always one of the highlights of the racing season and this one did not disappoint.  It is hard to beat three days of racing on the city front in both flood and ebb, with even the sun making an appearance on Saturday, and social events back on at the club after a two year COVID absence.  We missed some regulars for whom life, kids and work got in the way but still managed to get eight boats on the line for all three days, just a few less than the Knarrs.  Sadly there were no IODS, Bears or Birds.  With lots of close tacking along the city front upwind, and chasing the last of the flood out in the bay downwind, there were lots of position changes throughout the fleet.

Friday night’s race in 15-20 knots and a flood tide set the pattern of the weekend.  Tom Reed (111) got in the habit of charging through the fleet and overtook Peter Jeal (113) pretty much at the finish line.  Kurt Hemmingsen, driving 112 while Eric Kaiser was messing about in the Knarr fleet, showed he was no slouch and kept up with the leading bunch in a tight duel with Chris Hermann (108) to finish 4th.  Never far behind Tom Haverstock (125), Chandler Grenier (116), and Paul Dixon (105) duked it out for the remaining positions.

With the breeze quickly building in the transition from slack water to a building ebb Saturday bought lots of drama.  The first race followed the pattern of the first with Tom Reed building a steady lead over the chasing Peter Jeal and James Vernon (121).  By the time the second race started the ebb was on and there was a steady 20 knots of wind which made the downwind leg fun and the upwind hard work.  Paul Dixon (105) had to sit out to fix a winch but given that both Peter Jeal and Kurt Hemmingsen broke their whisper poles it might have been a good miss.   Half the fleet were over early but Peter Jeal wasn’t and he built a big lead. Remarkably he was able to hold on to it duing the long final downwind leg with his valiant crew Jihn Graham herocially holding half a whisker pole on the foredeck in a big swell. James Vernon managed to keep ahead of Tom Reed who finished out of the top 2 for the first time this season, and Chris Hermann was right behind him. The third race was cancelled. 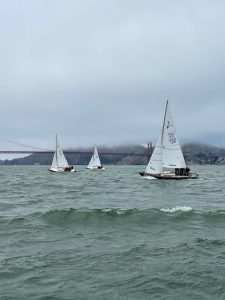 That left the Race Committee to squeeze three races on a foggy Sunday.  It was all to play for with Tom Reed and Peter Jeal tied for 1st on 5 points each, James Vernon a few behind on 8, and just a point or two separating both Kurt Hemmingsen and Chris Hermann for 4th and 5th, as well as Chandler Grenier, Tom Haverstock and Paul Dixon for 6th, 7th and 8th.  In a series of close races with lots of position and lead changes, Tom Reed took control of the regatta with two bullets although Peter Jeal and James Vernon was never far behind. All the drama was in the short final race with the breeze up and a big swell from the ebb which had now filled in across the race course.  Tom Haverstock got off to a flyer and held on to his lead under pressure from Tom Reed and James Vernon to claim his first bullet of the season.  Best thing I saw all weekend were the celebrations on board with his crew Paul Monks and Mason Smith.   Peter Jeal came in 4th to claim second place by one point from James Vernon. Kurt Hemmingsen finished right behind Chris Hermann to finish level on points with him but claiming fourth place overall from his higher number of 4th place finishes.  And Tom Haverstock’s bullet put him ahead of Chandler Grenier and Paul Dixon.

It was a wonderful weekend of racing with all the fun, camaraderie and close competition that makes the fleet so special.  Even the youngest among us in their 20s and 30s were exhausted but we now have the month of July to recuperate before the Classic Boat regatta held by Sausalito yacht Club on the 13th and 14th August.  Many congratulations to Tom Reed, Tommy Jr, and Dave Kresge for once again setting the standard and winning the Woodies for the third time in a row.