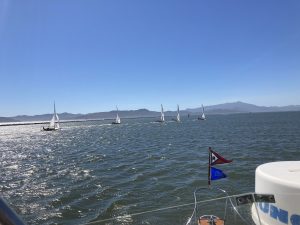 Strong breeze and paucity of dock space makes life a little challenging for early arrivals. Early arrivers help guide others to dock space, and help put boats away. Harbormaster Danny Harris makes an appearance, apologizes for the challenging situation, advises that the next day will be much better after the Jazz Cup participants are on their way. Some boat shuffling required as we are advised that we are blocking departure of some boats planning to head out early, and spaces closer in are found and the
more exposed end ties are largely abandoned. Those overnighting on their boats (Roger, Mark, Erin, Laurie) ultimately convene at the club for dinner with Dave and Evie.

Activity at the club proves to be as forecasted by the Harbormaster. The basin is abuzz with pre-race boat prep., many Moore 24’s and a couple Wylie Wabbits making up the majority of the small boats. Large boats are prepping in their slips with some barking by skippers before they have even slipped their moorings!

A peace descends on the RYC after the last of the Jazz Cup racers depart and Folkboaters emerge and congregate. Will Clemens gets the prize for sailing over with asymmetric spinnaker. A reunion vibe pervades the event as old and new converge on the dock. A course is established after surveilling the channel from the race platform. A triangle option becomes the de facto course for the day. No pole sets. Starboard roundings. Downwind finishes. Much anticipation of events and the necessary arrival of the remaining boats before things can truly get underway. Some agenda shuffling ensues, with the singlehanded event to lead off, the thinking being
that this is better tackled before it pipes up much. As proves to be true all day long, the wind on the channel is significantly greater than the wind in the marina. The brisk breeze on the channel allows for some quick 2 lap races while the lighter winds in the marina make for easy returns to the dock. 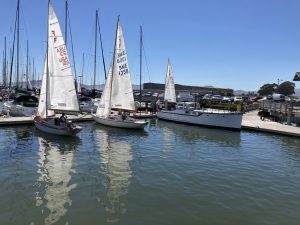 Other race categories follow in quick succession, the next being the women helm. This one is very hotly contested, as although this is a ‘fun’ event, it seems that everyone agrees that the most fun is had by going fast. The first 5 boats finish within 20 seconds of each other! Taking the cue from the women’s race, what turns out to be the last race of the day, the ‘old timers’ race, is equally hotly contested. It needs to be understood that being of a certain age is not what defines ‘old timer’. It’s anyone who previously owned a Folkboat. That’s how you end up with ringers like Sean Svendsen in the driver’s seat! Also like the women’s race, this one is hotly contested until the very end.

Back at the dock the consensus is that everyone has pretty much had their fill, and so no family race is held. This turns out to be prescient, as when the wind suddenly dies it becomes apparent that finishing with that event would have pushed happy hour much further back than appropriate! After some rudimentary tidying up and stowing away all assemble on the lower deck at the RYC, at this point seeking some relief from the sun. For the visitors it’s hard to give credence to the club members claims of almost constant fog. Swag table is covered with paraphernalia from events past and present. Awards ceremony follows with certificates given to top  3 finishers in each category.

It’s worth pausing here and elaborating a bit on the whole tenor of the evening. Because it’s really here that you gain an appreciation for the SFBFA and for events like this. The feel is almost like a family reunion, but the difference here is that these folks all genuinely like, respect and enjoy each other’s company. The overall feeling of camaraderie is undeniable and the speeches, memories, and photographs passed between old timers and newcomers just reinforce this. Here is where this event shines, as it provides that opportunity for people to reconnect and make new acquaintances in a way that can’t be achieved through race participation alone. Racers and non-racers, young and old all feel a genuine sense of inclusiveness that puts a smile on everyone’s face.

9/4: Of course, no event is complete without an after-party of sorts. For Folkboaters who tend to err on the side of caution, this constitutes a breakfast buffet put on by our indefatigable hosts, Dave and Evie at their home. From there we bid our farewells and boats begin to trickle away from the RYC, headed back to their home ports. As though the events hadn’t been special enough, the sail back is all anyone could wish for; a steady breeze, a flood tide and unseasonably warm weather making for t-shirt sailing. All
marinas are sweltering by the time everyone gets home, making the weekend’s events that much more attractive in hindsight.
The ultimate takeaway here: this kind of event needs to be held on a regular basis. No more 20+ year hiatus between ‘sail-ins’.