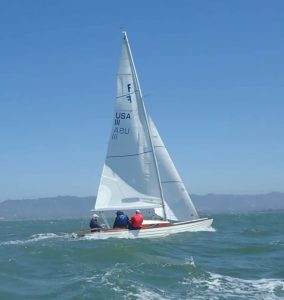 We are back! And what a return to folkboat racing it was. Most of us had not raced in earnest with full crew since the Internationals in late September 2019.  Tom Reed (111) and Paul Dixon (105) had blown off the cobwebs with a warm-up the weekend before when some of us were still scrambling to get our boats out of yards.  Yet there was no way to prepare for what we faced, two long days in the circle with a choppy flood and 25 knots of wind with gusts in the early 30s.  It was brutal.  On both days a boat lost crew overboard.  Three days later I can barely sit down.

With boatyards rammed and people struggling to get their boats ready we had just six boats signed up and five made it to the start line.  It was a debut regatta for Chandler Grenier and his crew Nilsu Uyguner and Mick Welch in 116, and a first time out in new boats for Paul Dixon in 105 and James Vernon in 121.  Tom Haverstock (125) and Tom Reed (111) were also out.

A flood and plenty of breeze made the trip to the circle the easy part of our day.  SFYC’s race committee did a great job setting up courses and getting us all started on time (J105s were out in number with a longer course and there were a smattering of Express 27s, J24s and J70s).  The faster fleets pretty much split either side of the course. There were three races on Saturday. It was hard work navigating the short and bumpy chop upwind, but much more fun downwind, especially if you could sail deep and avoid the gybe!  We hit a maximum speed of 9.5 knots on one wave.

When the races started we pretty quickly got used to looking at the stern of 111 which was first to the first mark in every single race of the weekend.  Tom Reed, Tommy Jr and Dave Kresge picked up where they left off in the 2019 season – they were fast, high and flatter than everyone else.  The real hero of the weekend was  on 125.  Bill Heitman fell in on the first rocky downwind leg and were thankfully quickly recovered without the help of the chase boat.  Remarkably, 125 completed the rest of the day, but Sunday was a bridge too far.

The real battle of the regatta was for third place. On Saturday 105 seemed to have 3rd place nailed down with two 3rds and a 4th but 116 was quickly demonstrating that they knew how to handle a folkboat in heavy weather picking up a 3rd in the last race and then improving on Sunday with a 3rd and a 2nd to claim third overall.

A challenging weekend to say the least.  The long beat home on both days was brutal despite a waning flood. Kurt Hemmingsen who was on board with me having been given time off from sailing with Eric for good behavior was unusually quiet as we headed to Alcatraz. By the time we hit the city front he finally spoke up to say he couldn’t remember a time he had wanted to get out of a boat as much!

I asked Tom Reed to let the rest of us know that he suffered too and to tell us how he manages to go so fast:

“In those conditions, high winds and big chop we are usually  maxed out on the controls. Max back stay on, outhaul all the way out, Cunningham on, sheet in travel down. The jib halyard is tight and the car is back and out.

We are looking for some twist and have the draft forward in both sails. Adjust the helm pressure with the traveler, you want some to help you steer. Make small adjustments to the sheets to keep the boat moving. In those waves you are constantly being slowed and are trying to accelerate after hitting a bad wave.

This is when driving the boat is the most fun!”