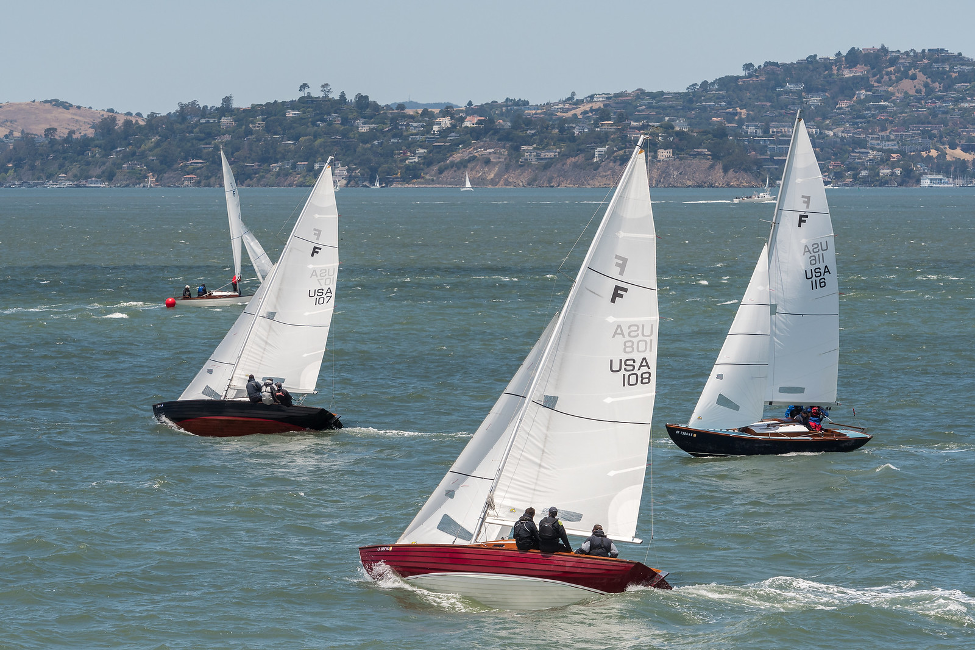 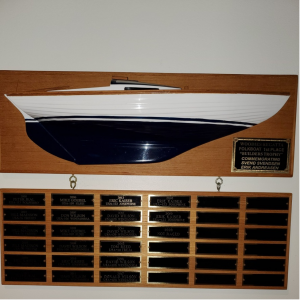 The Woodies Regatta has been held at St Francis Yacht Club for over 45 years, and this beautiful perpetual trophy awarded since 2000 when a young Peter Jeal won it.   Many of the boats may now be plastic but the classic lines of the IOD, Knarr and Folkboat fleets still make the event eye-candy for those on shore.  With five races over three days it is the center-piece of the Folkboat season championship, and the traditional cut-off even for local boats to qualify for the Internationals.  Back in the day the regatta was a relatively leisurely affair, with lunch held in the club between races on Saturday and Sunday.  Not so much this year.  With continuing caution over COVID protocols there were no social events other than a prize-giving after racing on Sunday.  And the racing was fast and intense.

This year we had ten boats signed up for everyone’s favorite regatta, but there were lots of other familiar faces from the fleet.  Chris Larsson (120) crewed for Peter Jeal (111), Laurie Chambers (123) was with Mark Slichter (56) and Isabelle DuMoulin (112) was on board with Dave Wilson (106). Paul Dixon, who misses sailing leaky wooden boats, was also out and about driving an IOD.

The first race on Friday evening was not for the faint-hearted.  A steady 25 knots of wind with gusts to 30 in max ebb with a big swell of 4-5 feet waves.  A couple of the fleet couldn’t make it, or thought better of it.  My vang and jib cleet broke but thankfully there was no further damage although Peter Jeal was spotted with a wrench in his hand on the downwind leg.  The race committee set up their windward-leward sausage course right in the middle of the bay where the swell was strongest so it was a very wet evening. Fun downwind, I almost hit double figures surfing on a wave, brutal upwind.  In these almost survival conditions no one can make a folkboat go faster than Tom Reed, Tommy Jr and Dave Kresge in 111.  They took a bullet and reminded us all they were the defending champions of the event.

Saturday bought an equally classic SF Bay summer morning. It was cold and grey, with an altogether more pleasant 15-20 knot breeze and a building, powerful flood.  This time the race committee set up close to X off Golden Gate Yacht Club and we raced up to just beyond Anita and down to Fort Mason.  The first race was 2 laps, the second a short and sweet one lap.  Short tacking up the city front was a workout with many positions constantly changing throughout the fleet.  If you got in phase with the shifts you made big gains, if not it was less pretty. Dave Wilson (106) and Tom Reed battled it out for first and second, Peter Jeal (113) and James Vernon (121) were trying to keep up and ahead of each other, and then the real action came in the midfleet with Chris Hermann (108), Chandler Grenier (116), Tom Haverstock (125), Richard Keldsen (107) and Mark Slichter (56).  108 , 116 and 107 came out on top on Saturday.

Sunday was very similar conditions and the race committee set up off Gas House marina with the bottom Gate just below Fort Mason and the top mark at Anita.  We had around 15 knots of breeze for the first race and those who started close to the pin and made it into the cover between the marinas were the first around the spit and to the first mark.  Dave Wilson helped by getting an OCS and then hitting the pin but James Vernon rounded the top mark first and hung on for the bullet ahead of the remarkably consistent Tom Reed.  That meant the last race was pretty much a formality for defending champions 111 but 106 and 121 were separated by just two points for 2nd overall.  The second race was one lap and Dave Wilson’s 106 team got to the shore first and took the bullet and second place overall with 121 finishing in third place just behind 111.  Tom Haverstock got 125 moving well on Sunday winning the mid-fleet battle to claim two fifth places.  The full scores and final results are here and some great photos taken by Gerard Sheridan are here.  Many thanks to Gerard for allowing us to use his pictures here. 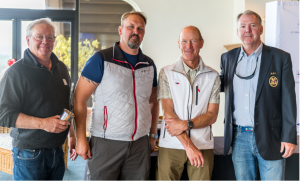 Congratulations to Tom, Tommy Jr and Dave for another commanding performance and successfully reclaiming the beautiful perpetual trophy of the Woodies.  A fun weekend of racing for us all and it was great to see the next generation of folkboaters out there – Isabelle DuMoulin on 106, Kate Andersen on 121 and even Matts Keldsen driving 107 in the last race.  One last Wednesday night in June and then a month off from racing until August.